I hope this email finds you well as we approach the Easter Break. On behalf of the Board of Trustees, I am proud to announce that Mr. Tim Fingerhut has accepted my invitation to become SJA’s Athletic Director. I am also excited to announce that SJA will be adding Ice Hockey to its athletic program in which Mr. Fingerhut will be its Head Coach. Mr. Fingerhut is stepping into this position for Mrs. Anne Marie Mercado who was recently named Dean of Student Life.

Mr. Fingerhut is a 1990 graduate of the Canterbury School (New Milford, Connecticut) where he excelled in three sports and will be inducted into their Hall of Fame later this spring. He was drafted by the Pittsburgh Penguins in 1990. He went on to study and play hockey at the University of Vermont. He continued his professional hockey career for 7 years playing in the ECHL, AHL, and IHL. After his playing career ended Tim continued to work in the hockey world before joining the faculty at St. Augustine Prep. Mr. Fingerhut was a Physical Education teacher and Head Ice Hockey coach from 2006 to 2022. His undefeated 2007 State Championship Team is regarded by many as the greatest hockey team in NJ high school history and was placed in the NJSIAA Hall of Fame in 2018 and the St. Augustine Prep Hall of Fame in 2022. Most recently, Mr. Fingerhut was the Director of Hockey at the Igloo in Mt. Laurel and Commissioner of the Atlantic Hockey Federation.

Having worked with Tim in the past, I know him to be an outstanding teacher and coach, but more importantly a man of integrity and character. He is an outstanding role model and advocate for our student-athletes. He is an excellent addition to St. Joseph Academy as we look to build a new legacy, rooted in our mission of FAITH, FAMILY, and FUTURE!

In Saint Joseph Our Patron, 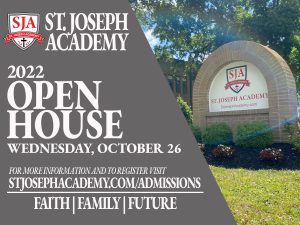